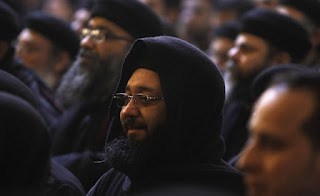 The Christian Brotherhood has branches in 16 governorates in Egypt as well as three branches in Europe and one in Australia. (Reuters)

A group of Coptic activists in Egypt announced the establishment of the Christian Brotherhood to counter the growing influence of the Muslim Brotherhood especially after their candidate Mohammed Mursi won the presidential elections.

The idea was first initiated in 2005 by lawyer Mamdouh Nakhla, head of al-Kalema Center for Human Rights, and political analyst Michel Fahmi. It was then adopted by Amir Ayad, member of the Maspero Youths Union for Free Copts, the group established after clashes with military forces in front of the TV building in the Cairo district of Maspero left more than 20 Copts dead.

The Christian Brotherhood has branches in 16 governorates in Egypt as well as four branches outside Egypt, three in Europe and one in Australia.
“The idea started in 2005 with the rise of Islamist groups, but it had not been put to action since then,” Michel Fahmi told Al Arabiya in a phone interview.

Fahmi explained that it was the victory of Muslim Brotherhood candidate presidential elections that necessitated taking steps towards creating the new Brotherhood.

“It was then important to establish a body that can resist the Islamist tide.”
Fahmi stated that he has no problem calling the Christian Brotherhood a sectarian group since the idea of the Muslim Brotherhood is also sectarian.

“We created our group to create a balance in the Egyptian political scene.”

The new group, Fahmi pointed out, is not meant to compete with Muslims but with the rise of political Islam and its members are not after power.

According to Amir Ayad, members of the group decided to put their ideas into action when they felt that the hope of having a civilian state was gone.

“With Mohammed Mursi’s victory, we felt that Egypt is about to turn into a religious state so we decided to create the group as a means of peaceful resistance against Islamist powers,” Ayad was quoted as saying by the Egyptian newspaper al-Youm al-Sabea.

This resistance, which Ayad likens to that adopted by Mahatma Gandhi, will be basically through chronicling all sorts of violations and discriminatory acts committed against Copts across Egypt.

“We will then use all available legal channels to make sure the perpetrators of these actions do not get away with them.”

In the first response to be issued by an Islamist body, the Salafi Front welcomed the establishment of the Christian Brotherhood as the counterpart of the Muslim Brotherhood.

“As long as the Christian Brotherhood will abide by the law and will work towards the welfare of Egypt, then there is no problem,” said Khaled Said, the front’s official spokesperson.